The History of Acupuncture 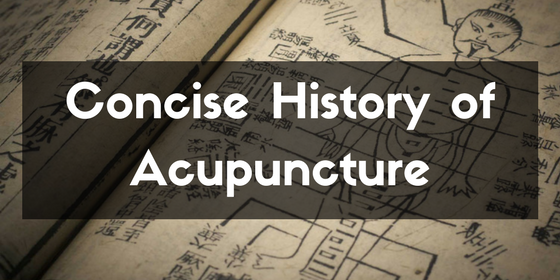 The Concise History of Acupuncture

Chinese Medicine is comprised of numerous healing modalities. The nutritional sciences of herbal medicine and dietetics utilize ingested and topical medicaments. The bodywork arts of cupping, tui na, and gua sha work exteriorly to treat patterns of disharmony (i.e. disease). Still, the most popular and well-known aspect of Traditional Chinese Medicine (TCM) is Acupuncture. Even so, the precise origination of acupuncture is a bit vague.

The ancient Chinese were prolific documenters of history and science. As such, the earliest recorded writing on acupuncture found to date is the Huangdi Neijing, translated as The Yellow Emperor’s Classic of Medicine. It is written in a dialogue format between Huangdi (Yellow Emperor) and the imperial physician. This treatise is a said to be written around 2600 BCE, making it older than the bible, and dating acupuncture to approximately 5,000 years old. Though, some scholars and historians date it to around 300 BCE (still older than the bible).

NOTE: Huang Di was a real historical figure who conquered and united the warring states of China. In fact, Qin Huang, as he was known before becoming Huang Di, is said to be how China was named.

What remains certain is that this foundational book of Chinese medicine writes in detail about a fully formed, comprehensive system of healing sciences. If this book were the first document of acupuncture and related modalities in TCM, how interesting that the medicine was replete with a complete and detailed theory, sophisticated techniques and instructions for medical practice, and organized systematically. It’s as if they just wrote about a precise science that had already been established for quite a while.

Chinese medicine as a whole is generally stated to be 5,000 years strong. Part of this reason is thanks to the Huangdi Neijing, and also thanks to Shen Nong. Emperor Shen Nong, another semi-mythological character from history, is said to have lived five millennia ago. He is attributed with giving the ancient Chinese agriculture, horticulture, animal domestication and husbandry, and also an advanced and complex methodical science of herbal healing.

Archaeology has turned up evidence that ancient needles were made of animal and plant parts, carved bones and thorns, dating back to 2205-1766 BCE! Going back even further, modern scientists have uncovered evidence of needles inserted in the skin for therapeutic purposes in Egyptian and Mayan sites.

Whether you desire to know more about the interesting history of acupuncture and Chinese medicine, or desire to experience the wealth of benefits from TCM, the practitioners at Lakewood Ranch Acupuncture and Wellness located near Sarasota, FL are here for you! Call our office today to schedule an appointment and let’s get you further down the road of health and vitality!

Besides Pain, What Can Acupuncture Treat?
April 16, 2019
Go to Top
Call Now Button